Rocha pears step out on streets of Paris 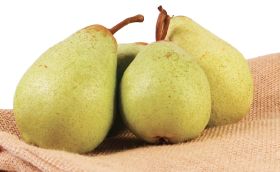 Portuguese Rocha pears are to star in a new advertising campaign on the streets of Paris under the slogan ‘La Saveur de la Poire Portugaise, Poire Rocha’ (The flavour of Rocha Pear, the Portuguese pear).

The project, which is being organised Portuguese Association of Rocha Pear Producers (ANP), will run from 24-30 October with the aim of raising awareness of the premium pear variety among French consumers.

A total of 340 posters will be strategically placed around the French capital, marketing the product as ‘Portuguese pear’ and featuring a close-up shot to underline its distinctive physical qualities, such as its russeting.

At the same time, ANP said the campaign would serve to promote the pear’s availability in the French market and in some of the country’s largest retail chains.

All four of these markets reportedly saw export growth for Rocha pears last season, with close to 60 per cent of the crop sold outside Portugal.

The campaign is co-financed by Compete 2020 within the scope of the Competitiveness and Internationalisation Operational Programme. The overall investment amounts to just under €431,000, of which 85 per cent comes from the European Regional Development Fund.