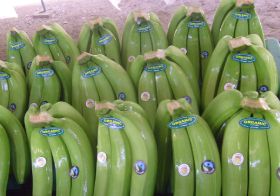 Peruvian exports of organic bananas are expected to exceed US$160m in 2018, an increase of 10 per cent over the previous year, according to the Foreign Trade Research and Development Institute (Idexcam) of the Chamber of Commerce of Lima (CCL).

Shipments to August stood at US$114.4m, representing a 12 per cent rise on the year-earlier period.

“In terms of volume, in that period exports totalled 158,670 tonnes and for December, it is estimated that they will exceed 230,093 tonnes, which represents an increase of 14 per cent in relation to 2017,” said Carlos Posada, executive direct of Idexcam-CCL.

“We expect shipments to become more dynamic towards the end of the year and are convinced that exports will surpass the figures seen in previous years.”

Peru produces around 280,000 tonnes of organic bananas a year, of which 82 per cent is exported. They are shipped to more than 30 countries, with the Netherlands, the US and Germany together absorbing around four-fifths of the export volume. Other notable markets include Belgium, Finland and South Korea.