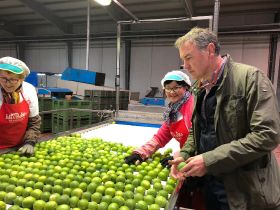 Grupo Eurobanan has more than doubled its sales of Spanish-grown limes this season, selling 1,000 tonnes under its Isla Bonita tropical fruit brand compared with 400 tonnes in 2017.

The company said the recently concluded 2018 campaign had been characterised by excellent quality and sizes thanks to abundant rainfall during the autumn.

Such positive results have helped Spain to consolidate its position as a complementary origin of fresh limes for the August to November period, when supplies from other countries are lower due to the rainy season.

“It’s not easy to grow Tahiti limes in the Mediterranean region because the wide temperature range greatly affects coloration. Nevertheless, the quality has been excellent this season with brix levels of 7o-9 o through the campaign and a juice levels in excess of 47 per cent,” said Eurobanan director Ramón Rey.

In spite of the high quality, Rey noted that the slow market, coupled with low productivity and higher harvesting and packing costs, had impacted the season’s profitability. Yields in Spain range from 20-25 tonnes per hectare, compared with 50-60 tonnes in tropical areas.

Nevertheless, he is optimistic about the future of Spanish lime production because “the fruit can be harvested, packed and on the way to the market within 72 hours without the need for any postharvest treatments, “which makes it ideal for juicing and chimes perfectly with European consumption habits”.