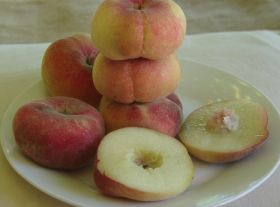 The South African stonefruit sector has not had an ideal start to the 2018/19 export season.

At present, the South African stonefruit forecast has not been changed despite the difficult start.

Giele Bester, an experienced stonefruit advisor previously at Capespan but now a key member of the In2Stone export team, said it was important not to get swept away by what has happened so far this season.

As a man with 45 years of experience in the sector, Bester knows his stonefruit, and knows that one has to find a balance between what growers tell you and what your experience indicates.

“It is not the big crop we all wanted, but then I believe it will not be bad either,” Bester outlines.

In2Stone is now in its third year after a group of stonefruit experts established the company when Capespan decided to move out of the segement.

In2Stone is located in the same offices as two other exporters, Green Marketing and In2Fruit, which allows the company to share backroom staff with the other two companies.

Bester has been in the fruit business as a technical and industry advisor since 1976 and had extended service at the Deciduous Fruit Board, Unifruco Ltd and Capespan. Now he says he enjoys working with a company focused on the relationship with its growers and building a new future with them.

This very much reflects the new way in which the stonefruit business is developing in South Africa – growers aligning themselves with specific exporting companies and developing their own export portfolios accordingly.

“Exporters have aligned themselves with their own group of growers and work with them to grow into the future. It is becoming a very focused business and this is key to our philosophy,” says Bester.