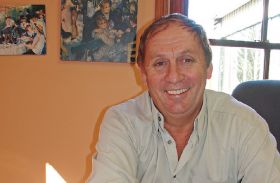 Leading South African citrus grower Gerrit van der Merwe has died after sustaining injuries in a freak accident while on holiday in Malawi.

Known far and wide through the international citrus industry as a key player in Western Cape's Citrusdal Valley, he was chairman of leading supplier ALG Estates and one of the region's most revered fruit growers.

It is understood Van der Merwe fell and suffered serious head injuries while walking with his wife Lizette to a restaurant in Lilongwe.

After initial treatment in the Malawian capital, he was transferred by air ambulance to Johannesburg where he finally succumbed to his injuries. He is survived by his wife, two sons and a daughter.

Piet Smit, another leading member of the Citrusdal citrus community, described the loss as a "devastating blow" for the entire citrus community "because he was visionary farmer and leader”.

According to Smit, Van der Merwe was very fond of touring in Africa and his aim this time round was to visit Uganda’s gorillas. “He was at his happiest somewhere under a tree next to a river in the African bush."

Johan Mouton, who recently retired as chair of the Western Cape Citrus Producers’ Forum, a group founded by Van der Merwe himself and other leading growers to promote South African exports to the US, described him as one of a kind. “A people’s person who led by example and contributed to the well-being of the whole industry."

“The world is a poorer place with the passing of Gerrit van der Merwe,” said Citrus Growers’ Association chief executive Justin Chadwick. “Gerrit was a great leader of the South African citrus industry – and his wisdom will be sorely missed."

Chadwick said his personal warmth set him apart. "Without doubt he was 'Mr Hospitality' – those who visited his farm or his home felt mightily welcomed. He was proud of his family, his business and what he had achieved. He always had a mischievous twinkle in his eye – and a fantastic sense of humour. For Gerrit, life seemed to be a big adventure – and it is perhaps fitting that he died doing what he liked most – being adventurous."

Karnemelksvlei, where Van der Merwe was based, is the ancestral home of the Van der Merwe family since they settled in the Citrusdal Valley in 1768. It is one of the oldest farms in the valley and where he and his brothers, All and Lieben, founded one of the best-known and most advanced citrus businesses in South Africa.

“His vision to create ALG Estates with his brothers, expand production, built packhouses and coldstores, even a processing plant, showed that he was always at the forefront of the South African citrus industry. He found solutions when others saw problems, he inspired people to work with him and kept them working with him whatever the odds,” said Piet Smit.

One of his best-known initiatives was establishing Cedar Citrus along with a number of his farm-workers as a land transformation project that would give them ownership. “We were mere farm workers," commented Tiekie September, one of the shareholders. “Now we are owners of a citrus farm which is exceeding all expectations. It is a difficult time for us and for all those who are involved with ALG Estates.”

A memorial service for Gerrit Van der Merwe will be held at Citrusdal on Thursday 27 December.