Mexico could be next market for Belgian pears 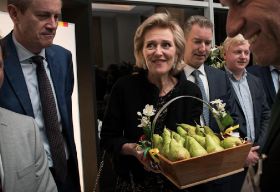 Belgium's fruit business has opened the door on a potentially important new export market with the first arrival of its Conference pears in Mexico, another sign that it can overcome the loss of Russia as a major foreign sales outlet.

Princess Astrid of Belgium was in Mexico this week to personally welcome the inaugural consignment, prompting members of the Belgian horticultural trade to predict a bright future for sales of the fruit to the North American nation.

An official protocol remains to be signed before a regular flow of Belgian Conference pears can potentially have free access to Mexico's 130m consumers, but plans are already being put in place to organise shipping programmes with customers and to roll out a marketing campaign involving product tastings in stores.

According to the country's agricultural marketing agency VLAM there is every hope this campaign can be launched very soon. As they have done in the past for countries such as China and India, a number of suppliers have already submitted a dossier via the Belgian Horticultural Cooperatives (VBT) to Belgian federal officials seeking approval to send the fruit to Mexico.

A plant health certificate will be required before access can be granted, but following several years of research it is understood that Mexico's own food safety authority Senasica has acknowledged the quality of the Belgian Conference variety.

"The Conference variety is the number one pear among Belgian pears," said a spokesperson for VLAM. "Nowhere else in the world are the cultivation circumstances better than those found in the Belgian climate. The soil and great care that our fruit growers take, make for an absolutely top product."

"There is now nothing standing in the way of signing an agreement and admitting the Conference pear onto the Mexican market," the spokesperson added. "Once such approval has been granted, VLAM can support the Belgian farmers further. We can set up a marketing campaign in the country concerned.

"Promoting a product takes time. The opening of a market does not mean automatic sales. The Belgian Conference pear is a unique product. Its shape, taste and crunchy texture are not well-known in most countries outside of the EU."

VLAM will apparently focus its attention on buyers, to convince them of Conference's advantages, by participating in trade shows and placing advertisements in specialised, trade-orientated magazines.

Its marketing campaign is part of a three-year EU programme, starting this year and with a total budget of almost €860,000, covering the US, Canada, Mexico and Colombia.