Casting a fresh eye on packaging 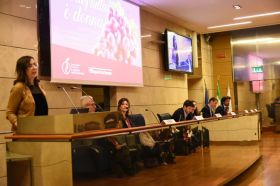 Representatives from some of Italy’s leading packaging companies met in Bologna on 8 March for a conference on the future of packaging organised by Le Donne dell’ortofrutta, the national association of women in produce.

Plastics topped the agenda at the event, titled ‘The packaging revolution’, which examined how companies along the supply chain, from production to distribution, could adopt more sustainable packaging solutions.

Following a welcome address from Alessandra Ravaioli, president of the women’s association, Nicola Pisano of Freshfel Europe kicked off the programme with an overview of how new European Union legislation on plastic packaging will impact the fruit and vegetable sector.

This was followed by interventions from representatives from a number of leading packaging companies, including Lorenzo Foglia of Bio-on, Enrico Frigo of CPR System, Riccardo Zoffoli of Infia and Claudio Dall'Agata of Bestack, as well as Rossella Brenna, sales director of the U2 Supermarket group.

“Fruit and vegetable is a fundamental sector for us,” said Foglia, whose company, Bio-on has developed revolutionary 100 per cent biodegradable bioplastic derived from agricultural waste.

Foglia acknowledged that while the new system would not change the world, it would “certainly make a concrete contribution to the plastics emergency, which is literally destroying our planet”.

Enrico Frigo of CPR System explained how the 140m reusable plastic crates in the company’s pooling system had an average life cycle of seven years, after which each crate was recycled to form a completely new crate – a virtuous circle of collaboration between the different actors of the fruit and vegetable supply chain.

The conference also heard from Infia’s Riccardo Zoffoli how, rather than a material that should be demonised, plastic offered clear advantages for the fresh produce industry. All of Infia’s packaging is made from 100 per cent recycled polyethylene (PET).

“Our packs protect fruit and vegetable products, preserving their freshness for as long as possible and therefore reducing waste, while also guaranteeing food safety,” he said adding that more should be done to communicate this positive message to consumers.

Claudio Dall’ Agata of Bestack went on to make the case for corrugated cardboard, which accounts for 35 per cent of fruit and vegetable packaging in Italy.

He argued that pitting one packaging material against another made no sense. “Each material, in its own way, is sustainable….instead we should be asking ourselves: ‘how do I add value to a product to make it stand out on supermarket shelves?’,” he said.

Rossella Brenna, sales director of Unes (U2 Supermarket), explained how different packaging formats played a key role enhancing the attractiveness of fresh produce. She said the retailer kept packaging to a minimum in its fresh produce section, allowing customers to buy the amount of fruit and vegetables they required, in order to reduce food and packaging waste.