As the death toll in Mozambique and Zimbabwe rises, fresh producers growers are also counting the cost 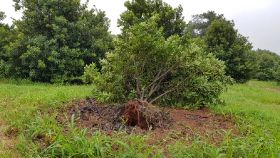 Fresh produce growers in the south-eastern parts of Zimbabwe are counting the cost of Cyclone Idai which moved over the country at the weekend.

Macadamia and coffee orchards have been severely affected by the storm which dumped more than 500mm of rain on the region.

Mozambique’s environment minister Celso Correia described the storm as the biggest natural disaster Mozambique had ever faced. “Everything is destroyed. Our priority now is to save human lives,” he said.

A fresh produce grower at Mount Selinda in the Chipinge District of Zimbabwe, who wanted to remain anonymous, said the Macadamia and coffee orchards were the worst affected. “Avocado orchards came out of the storm better but we took a direct hit.”

It is a devastating blow for agriculture in a region that is in the process of rebuilding after years of decline under the Mugabe regime.

After recent positivity at the change of leadership, attempts to invade land has further dented optimism.

Meanwhile, the effects of the cyclone are also causing severe disruptions further south in South Africa, where businesses and citizens were without power for up to seven hours a day over the weekend.

Electricity from the Cahora Bassa Dam in Mozambique is fed into the South Africa system, which is already falling apart after years of poor administration and corruption, which has brought the state-owned Eskom Company to its knees.

The power interruptions are called ‘load shedding’ and are a method of saving electricity by simply interrupting supply to regions of the country on a rotation basis.

The threat of damage to fruit crops being packed is very real and the apple and pear industry recently instructed its Packhouse Action Group (PAG) load shedding workgroup to discuss the impact of these power cuts.

“The present uncertainty of load shedding schedules and the level of power cuts, require urgent proactive measures to address operational disruptions that can impact on fruit quality’” Hortgro said in a newsletter.

“To manage the possible build‐up of uncooled or partially cooled apples at cold stores due to load shedding, a dispensation has been obtained from PPECB for the maximum loadout temperature for apples of +3.0°C to be applied,". (Presently the set point is 2.0°C which in practice normally equates to a maximum of +1.5°C). "The dispensation applies only in the case of power cuts, and this needs to be verified with the local PPECB inspector.”

Hortgro said this arrangement could not be applied to summer pears due to the risk of quality problems.