Eucofel sets out plan of action 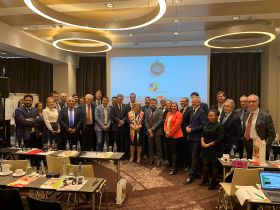 Eucofel, the organisation representing producer and exporter associations from the EU member states, has agreed a series of measures to strengthen the production and trade of fruits and vegetables within the community in 2019.

At its annual general assembly in Warsaw on Friday, the organisation held a series of debates on the defence of the EU’s fresh produce sector centring on research, innovation and reform of the Common Agricultural Policy.

Eucofel also announced that it would continue with the Cultivating the Taste of Europe (CuTE) campaign to promote fruit and vegetable consumption within the community, to 2021.

The campaign, which is co-financed by the European Commission and Spain, France, Germany, Greece and Poland, was launched in 2018.

Eucofel’s president, Juan Marín, said the focus in 2019 would be on contributing to the sustainability of the sector in three key areas: the social, by promoting stable, good quality jobs; the economy, by strengthening the productive and commercial fabric of the industry; and the environment by contributing to the efficient management of natural resources, especially water and soil.