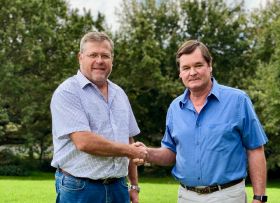 The more than 15 per cent average drop in production, and linked income, from the drought in the Western Cape does not accurately demonstrate the severe impact on some growers.

For example, producers between Worcester and Villiersdorp were 46 per cent down this year compared to last season.

Despite the fact that the drought continues to affect some growers of the Two-a-Day group, who are members of the marketing organisation Tru-Cape, they have still decided to contribute to a fund helping other farmers in the greater Karoo region.

According to Two-a-Day Group managing director Attie van Zyl, more than 80 per cent of the growers voted to contribute a per-carton amount towards the most needy of growers in the Karoo area of the Greater Western Cape, where the drought’s impact was felt most severely. Those who didn’t contribute were already involved in relief in other ways.

“Growers contributed R583,460 to Agri Western Cape who will be in the best position to manage the payout,” said Van Zyl. “We wanted the amount to be ring-fenced for drought relief and also wanted all donations to be transparent and traceable which is why we enlisted Agri Western Cape to handle pay-outs where they will be the most needed."

Jannie Strydom, CEO of Agri Western Cape, said his organisation had been assisting producers in drought-stricken areas for the past four years by means of its drought relief fund, which is audited by external auditors.

The Karoo regions have experienced major water shortages, which has resulted in major relief programmes in terms of water provisions and donations from across the country.

With the rainy season in many of these areas now over and the winter ahead, the immediate future will also be difficult. Some of the best apricot, nectarine and plum growing regions are located in these areas.

“It is really heart-warming when competitors put aside their individual businesses out of concern for the greater good and ongoing support for those most negatively impacted," said Strydom. "We have seen so much goodwill towards the agriculture sector during the drought, and we are thankful for it."

“South Africa’s fruit industry is all about people - we have chosen not to mechanise and rather to keep jobs for people who, in all likelihood, would be without work if it weren’t for the fruit industry. This donation to support growers is so that they, in turn, can support their staff.”

Tru-Cape’s managing director Roelf Pienaar commented that it was wonderful that even in a 'belt-tightening business phase', people were willing to be generous and to help others. “The kind of support the fruit industry provides is truly inspirational,” he said.