Pink Lady gets sporty in UAE

The Pink Lady apple brand was on display during the Special Olympics World Summer Games in Abu Dhabi, following its recent tie-in with the Dubai Marathon 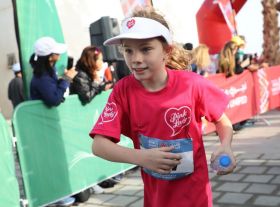 The 2019 Special Olympics World Summer Games, a multi-sport event for athletes with intellectual disabilities, was held in Abu Dhabi, in the UAE, on 14-21 March.

The Pink Lady apple brand was on show during the “Run Unified” race, which took place on 16 March on Hudariyat Island.

According to LucaZara, which manages the Pink Lady brand in the region, approximately 2,000 Pink Lady apples were distributed on the day, thanks to the assistance of Special Olympics volunteers, while a number of participants took to the course wearing the Pink Lady jersey.

“It was an honour and a privilege for Pink Lady to play a small part in this beautifully memorable event, especially witnessing the determined athletes participate with such grace amid the encouragement and support of the spectators,” LucaZara stated in a press release.

The promotion follows Pink Lady’s recent successful tie-up with the Dubai Marathon in January of this year.

“Up until this, all our promotional spend had been in-store,” said LucaZara managing director David O’Brien. “But we’ve got to get the message to consumers beyond the store. The Dubai Marathon was the test and we were blown away by the reaction. 30,000-odd people took part and it’s a real family occasion. It went so well that we want this to be the flagship promotion for Pink Lady in the UAE.”

According to O’Brien, Pink Lady apples are seeing good growth in the UAE, as well as in Saudi Arabia and Qatar.

“Saudi Arabia has the most potential in the Gulf region,” revealed O’Brien. “Here in the UAE, the market is the most mature. By the end of this year, we expect Saudi Arabia to surpass the UAE in terms of demand.”