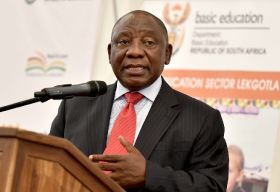 Hopes in South Africa's Cape fruit community that the victory of Cyril Ramaphosa and his ANC in last week’s general election would lead to a new era of rebuilding the country after widespread fraud and looting of state institutions by the previous administration, have been dampened somewhat by the killing of a Cape fruit farmer.

Bonnievale fruit farmer Tooi Wessels was killed in the attack and his wife seriously injured. Bonnievale is located in the Breede River Valley in one of the country’s prime fruit regions.

Hortgro Chairman Nicholas Dicey said the industry was concerned about what appeared to be a new wave of violent crime. He noted in a statement that in recent weeks, several disturbing incidents had been reported, among them incidents at De Doorns in the Hex River Valley and at Grabouw in the Elgin region.

Dicey said that two major national roads had been closed for extended periods because of intimidation, violence, looting and destruction of property.

“We have to find new strategies and resources to protect our rural communities," Dicey outlined. "Farmers, farm workers, communities and civil society cannot do this alone.”

He said the government should immediately put actions in place to protect farmers and rural communities from the spate of violent and barbaric attacks experienced recently.

“We need decisive action from the Government to find and prosecute perpetrators. There need to be a serious focus on creating and providing capacity and resources at ground level for the police and community safety institutions to be able to do more than what is currently the case.”

Dicey warned that the recent incidents could have a devastating effect on the economy, food security and job security, thereby destabilising the country.

Hortgro called on the farming community to be vigilant and well-organised, with early warning systems in place to prevent incidents and adequate response strategies.

At Grabouw in Elgin, one of the premier apple and pear regions, a strike by workers on the Oak Valley Estate has escalated into the local community, further fuelling the situation.

The latest incidents have been reported in the Western Cape, the only province in South Africa not won by the ANC in the recent elections.

It is now a matter of process before Cyril Ramaphosa is elected in Parliament next week and installed the following weekend. He will then announce his new cabinet. He will be under huge pressure from the citizens of the country to act against corruption, lawlessness and rebuild the economy. So far he has been making all the right noises, most recently reiterating at an investment conference that there will be no Zimbabwe-style land grabs in South Africa.

He will have to look over his shoulder, though, at the factions within his own party destabilising his efforts because of their own involvement in state capture.

On the left he will have noted the rise of the populist EFF party which has doubled its lead. The ANC has received its lowest percentage of the vote since democracy 25 years ago and observers have warned that it may have been the last election in which it will receive a clear majority.

The most immediate challenges facing Ramaphosa will be to retain the faith the country has generally put in him – and to deal with his own party. The divisions in the ANC are likely to be further exposed and should there be a split, it may be devastating for the country because it will require coalitions which will give the populists a stake in the government.