Industry expert forecasts a bright future for the banana sector, but warns that pricing and shipping issues will have to be overcome 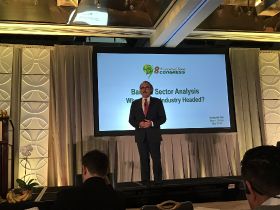 Issues around retail pricing, combined with looming shipping cost rises, could be the biggest hurdles in the path of a positive future for the world’s banana industry.

Speaking at the International Banana Congress in Miami this week, industry consultant Benjamin Paz highlighted a number of reasons for optimism for the future. These included the fact that per-capita consumption is rising as an ageing global population seeks more healthy food, and the emergence of a growing middle class that sees fruit as an integral part of their diet.

Currently the US and EU account for 60 per cent of the world’s commercial banana consumption despite the fact that only 11 per cent of its population lives there, but Paz believes there is still potential to grow sales further in those two key markets. In both North America and Europe consumption averages around 13kg per person per year, which equates to only around 1.4 bananas per week, suggesting there is still headroom to grow.

“If we can increase per-capita consumption by one banana per week we would need another [supplier the size of] Ecuador,” Paz said, however he stressed that reaching that goal would not happen by simply lowering prices as bananas are an inelastic product.

Paz suggested retail banana prices are currently too low, but stressed that rather than an increase being on the horizon, it was more likely that the supermarkets would try to push them downwards as price wars continue. A bigger factor set to affect price negotiations is IMO 2020 - the International Marine Organisation’s ruling that from 1 January next year, all sea vessels will have to control and reduce their use of sulphur within fuel from the current 3.5 per cent to just 0.5 per cent. Given the fact that carriers’ options will include switching to pricier low-sulphur fuel or installing scrubbers on board at a cost of millions of dollars per ship, the cost of transportation will inevitably increase.

“So we as an industry have to look at how to reduce costs,” Paz said. “We will have to look at disintermediation, examining what value every intermediary adds and eliminating any process or procedure that doesn’t add value.”

The current “win-lose” relationship between retail buyers and suppliers will also have to change, he intimated, with retailers accepting there is a limit to how much cost can be stripped out of the supply chain. The best option, he added, would be more collaborative working to ensure consumers buy more bananas, but through improving POS, colour and service rather than simply cutting prices.

The industry also needs to improve productivity and find ways to grow better, Paz concluded. There has already been progress in that area, however, with an increase in the number of producers achieving over 3,000 boxes per hectare per year.