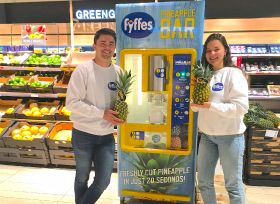 Shoppers will be able to watch as their pineapple is prepared in front of them, using a swish of blades to produce ready-to-eat pieces in just 20 seconds.

Understood to be the first machine of its kind in Ireland, the Piñabar will be in operation in Ennis; Dundalk; Terryland, Galway; Jetland, Limerick; Bishopstown, Cork; Newbridge; Maynooth; and at Dublin’s Cornelscourt, Blanchardstown, Stephen’s Green, Pavilions Swords and Portmarnock stores.