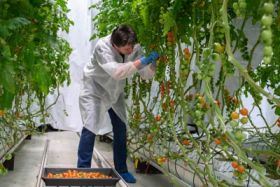 Tomato growers could potentially boost their yields by more than 10 per cent by using so-called full-spectrum LED lighting, according to the results of a new trial conducted in the Netherlands.

Preliminary data from the trial indicated that Fluence's trademarked PhysioSpec Greenhouse full-spectrum system, which are already known for their energy efficiency, produced yields up to 11 per cent higher, depending on the cultivar.

“The initial results of this trial show growers can cultivate tomatoes as effectively with PhysioSpec Greenhouse as they can under HPS, possibly with a better yield, and with shorter stems,” commented Dr Ep Heuvelink, associate professor at WUR.

“Both varieties in the trial, Tomagino and Merlice, developed well under PhysioSpec Greenhouse and the fruits had similar dry matter content to those under HPS. Fruit yield for Tomagino is a bit higher in the LED sections of the trial, which is a welcome benefit on top of the energy saving LEDs exhibit over HPS technology.”

WUR is expected to publish the full results later this year.

Vortus director Barend Lobker observed that most of the greenhouse industry still used HPS as a source of supplemental lighting.

"The WUR trial proves this should not be the case," he said. "Growers have been reluctant to move to LEDs because they are uncertain if these can be as effective for cultivation. The trial results should eliminate any doubts around the capabilities of full-spectrum LEDs.”

“The results demonstrate that even without altering the growing environment in any other way to optimize it for LEDs, they can match, or even out-perform HPS lighting for commercial growers," he noted.

“Further studies Fluence is undertaking on the effects of light quality, distribution, and intensity, as well as how to optimise the rest of the environment to get the best from full-spectrum LEDs, should demonstrate significant improvements in productivity compared to current HPS lighting practices.”

Cooperating with the world’s most innovative researchers, consultants and growers is a top priority for Fluence.

The results from this latest trial with WUR are the first in a series that the company will release over the coming months.

The group is also working on other initiatives with research centres, universities and organisations around the world to further develop best practice and investigate more pioneering applications for the industry.

“Basing our solutions on research and science is one of the fundamental things that sets Fluence apart,” said chief executive officer David Cohen.

“We are proud to be working with Wageningen University and to join the WUR Club of 100, to further extend the world’s understanding of critical and fundamental horticultural research.

"Greenhouses are a significant source of nutritious fruits and vegetables and WUR’s ground-breaking research will enable growers in more countries to produce high-quality crops in an energy-efficient way.”