The French apple exporter marked its 50th anniversary with a celebration of its suppliers, growers, customers and staff and the unveiling of a new logo 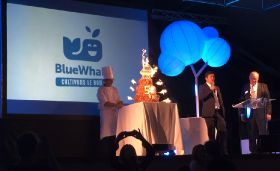 The company celebrated the occasion with a soirée near its headquarters in Montauban in southern France, attended by more than 560 of its suppliers, clients, growers, elected members, and present and former staff.

President Christophe Belloc and managing director Alain Vialaret, who announced that he will retire next year, led attendees on a journey through the history of the company from 1969, including arguably its toughest moment in the early 1990s, when frost destroyed 90 per cent of the apple harvest, leading eventually to the closure of all but one of the company’s packhouses.

What followed was an effort to reduce costs while boosting harmony throughout the organisation, welcoming new partners, fostering grower loyalty and promoting innovation, paving the way for the introduction of new varieties.

“Blue Whale’s success is firstly down to the value of the work of our fruit growers,” stated Vialaret. “They are responsible for our success. In 50 years, we have gone through several crises that we have overcome thanks to strong chairmen, united producers and constant innovation.”

Belloc paid tribute to the company’s previous presidents, including his own father André Belloc, who sadly passed away yesterday (24 June). “André Belloc was able to develop Blue Whale by being both a producer and an entrepreneur,” he said.

In an on-screen testimonial, André himself made no mention of his own important role, but summed up the current strength of the company’s position: “Blue Whale could hardly be doing better than it has been doing,” he said.

The company now exports to more than 80 countries worldwide and boasts 300 producers, 400 customers and a turnover of €270m. Looking to the future, Christophe Belloc revealed the objective to double Blue Whale’s activity over the next ten years. That means maintaining its leading position in apples, he said, including in organic and zero residue apples, while boosting its standing in pears, plums and kiwifruit.

“This will require dynamism and new partnerships,” said Belloc. “We have a brand that stands out, and our new logo retains these same qualities. Our whale is friendly, smiling, dynamic and also looking to the future.”