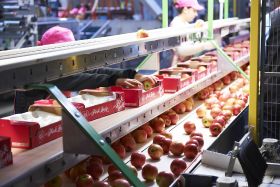 Pink Lady has outlined its results for the season, revealing that the brand gained market share against a background of declining apple consumption in key EU markets.

According to Pink Lady Europe, sales fell from 178,000 tonnes last campaign to 170,000 tonnes, with the "minor fall" attributed to harsh weather conditions during harvesting.

The brand saw "performances in line with stated objectives on customer retention and recruitment, as well as significant progress towards achieving the target of 275,000 tonnes in 2025".

According to a survey, Pink Lady also saw growth in reputation across all markets, with seven out of ten countries surveyed turning in a score in excess of 80 per cent for recognition of the brand's popularity.

Pink Lady Europe also highlighted a number of corporate responsibility steps it had taken, including the roll-out of Bee Pink, the launch of smart pomiculture, the reinforcement of initiatives like Pink Lady Talents and We Are Pink, and the launch of the new Pink My Life loyalty club.