The €4.8m promotion will run for three years in six countries and feature 11 products 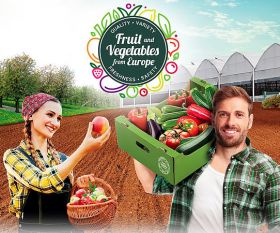 The first pan-European campaign for the promotion of fruit and veg was officially launched in Brussels this week.

Backed by the national associations of Spain, France, Poland and Greece, CuTE – (Cultivating the taste of Europe) will showcase Europe’s sustainable agriculture model via a mobile greenhouse travelling through various European cities.

“CuTE is the first European campaign organised by European producers and the EU to increase knowledge of specific methods of agricultural production of fruits and vegetables (greenhouse and outdoor) and their characteristics (variety, quality and taste) in the internal market,” the organisers said in a press release.

Around €4.8m has been set aside for the campaign, 80 per cent of which will come from the EU. It will run for three years (2019-2021), with actions being carried out in six markets: Belgium, Germany, Greece, France, Poland and Spain.

A press conference was held at the headquarters of the European Parliament in Brussels on Wednesday, after which the Eurotour mobile greenhouse was opened to the public in the Ágora Simone Veil.

The event was attended by several representatives of the European sector including Eucofel president Juan Marín, Spanish MEP Clara Aguilera, and the presidents of the national fruit and vegetable associations of Spain, France, Poland and Greece.

“We are very proud of our European promotion program. CuTE is the first joint European information and promotion campaign in history promoted by European fruit and vegetable producers,” Marín said.

“This programme is the result of hard work and joint enterprise. All partners share common global interests and challenges and the defence and promotion of European fruits and vegetables is a common mission for all of us.”