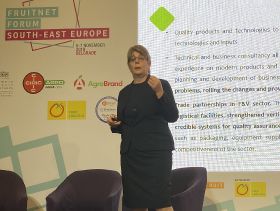 Serbia has a number of competitive strengths and has the potential to expand its exports further, particularly if it can capture more of the fresh market.

That was one of the key takeaways from the opening session at the Fruitnet Forum South East Europe event in Belgrade on 6 November.

Ivana Dulic Markovic, a consultant at Seedev in Serbia, outlined the product areas where the country is most competitive: in fruit, Serbia ranks second globally on raspberries, third on cherries, seventh on apples, ninth on strawberries and 22nd on blueberries. It is less successful in vegetables, ranking fourth on peppers but only 18th on tomatoes, 23rd on onions and 25th on potatoes.

Factors determining how competitive a country is include having a favourable business environment for agriculture, cost and availability of labour, market access, risks and access to finance, among other things.

The wider south-east Europe region has a number of products in which it excels, Dulic said, including Serbian raspberries, Croatian tangerines, Macedonian grapes and cabbage, Bosnian cucumbers and Albanian tomatoes, all of which feature successful and well-developed value chains.

The focus for growing the sector should be on high quality and yield, and adopting improved technologies and inputs, Dulic said. However there is a lack of knowledge in the region about modern products and technologies and a particular lack of expertise about specific markets, strategic planning and the creation of new businesses.

She also pointed out that there is a significant opportunity for producers in Serbia to increase exports – but they will need to switch their focus onto the fresh market rather than frozen. “There is more demand for fresh,” she said. “In Serbia and the wider region the focus is on processed, and we have not realised the opportunity to be competitive in the fresh sector.

"The demand for frozen has been declining for four years in a row. In the frozen sector we have only one variety and model and we have failed to adapt to a more complicated model. We need to invest more to become a more attractive market for new technologies.”