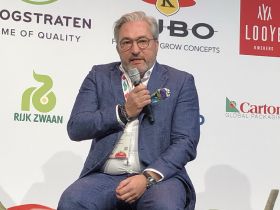 Stephan Weist at the Global Tomato Congress in Rotterdam

Rewe has revealed a massive reduction in its number of tomato SKUs in a bid to simplify the offer and make it less confusing for consumers.

Speaking at Fruitnet’s inaugural Global Tomato Congress in Rotterdam, the German supermarket’s category director for fruit, vegetables, flowers and plants, Stephan Weist, said he was fed up with the constant slew of tomato innovation, brands and packaging coming to market.

He revealed that Rewe had whittled down its number of tomato SKUs, from a staggering 870 across its 3,500 stores. The top three of these accounted for 30 per cent of sales, while the top 50 made up 97 per cent, meaning that many of the remaining tomato products enjoyed only minimal sales.

Now the retailer only sells 21 different tomato, which Weist said is still “a lot”.

“We have a lot of tomatoes, and as a consumer you’re overwhelmed when you’re in front of our shelves,” he told delegates.

“You can imagine what the other three per cent does to the assortment. They puzzle the consumer, they slow down sales by SKU, and it gives us the headache of having not so fresh tomatoes on our shelves.”

He added: “Part of what makes the tomato category so interesting – the variation we have – also make it very complex, and I think cracking that is one of the biggest challenges we have for the category.”

Speaking in a later session on some of Rijk Zwaan’s new tomato varieties in the commodity and premium segments, Alberto Cuadrado agreed that the sector has to be more focused.

“We always focus on the top of the category – the really expensive varieties – but we see that the consumption is normally highest at the bottom of the pyramid,” he said.

The trick, he believes, is to offer commodity varieties that still have good taste attributes, stressing that even a small increase in flavour can have a significant result when it comes to sales and consumer enjoyment.

Commenting on which tomato types are selling best, he added that there are “real possibilities” in salad tomatoes that offer a good consumer experience, as well as smaller types, such as baby plum and cherry tomatoes, which lend themselves to the growing trend for healthy snacking.

One variety that is well positioned for snacking is Syngenta’s new purple-skinned cocktail tomato brand Yoom, which is spreading its wings after being well received in markets across Europe.

Developed through Syngenta Vegetable Seeds' natural selection breeding programme, Yoom was first presented at this year's Fruit Logistica in Berlin but was showcased again at GTC.

The brand campaign initially saw volumes sent to markets including Spain, Italy and Portugal, with Yoom also supplied to France, Benelux, Germany and the UK.

Now, the Yoom brand is being extended to North America and Australasia, where pilot trial growers have reported on "excellent plant performance" in terms of yield and shelf-life.

Earlier in the day, Weist had said tomato consumers in Europe are more interested in locality and a connection to the grower than brands, but when this was put to Ruud Kaagman and Jeremie Chabanis of Syngenta the pair insisted brands still have value in the tomato category, provided they are clearly defined.

“I do believe in branding but we need to work together in defining how to build a brand, who’s going to build it, and how we invest in the brand because otherwise you get the Wild West with thousands of different brands and it has no value at all,” said Kaagman.

In another session on the Launchpad stage Martijn van stee of Enza Zaden explained how the Dutch breeding company had responded when the well-known tomato disease Cladosporium hit supposedly resistant varieties in Germany and New Zealand.