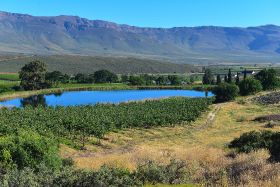 Growers in South Africa’s early table grape regions are struggling to maintain export programmes and fruit growers in the Cape say they cannot maintain their normal irrigation systems which may affect the volume and quality of their crop next year.

An ageing system, near collapse because of lack of maintenance, and heavy rain in the north of country have been blamed for disruption in generation at a number of power plants. The situation is described as the most serious threat to the economy in the history of the country.

The country’s president, Cyril Ramaposa, described the power crisis as a devastating blow to the economy. While stating that there will not be disruptions during the Christmas period, he did not offer any solutions on how the crisis will be resolved in the long term.

The electricity supply company, ESKOM, is central to the present investigations into corruption in the country.

Two other state entities, South African Airways and the rail network company PRASA, were this week put into administration – further ruining confidence in the country. What is happening with Eskom is vital for the economy, which is facing investment downgrades in future.

Growers in the Orange River started their new crop just three weeks ago and have a long way to go to get to the end. While packing continues with the help of solar power installations and emergency generators, they are struggling to cool their grapes in the specified time before loading.

“At times we have seven-hour interruptions and it takes just so much longer to cool the grapes,” said one grower, who points out that there is a snowball effect because the grapes arrive later at the ports and sometimes lose shipping opportunities.

Leading Ceres grower Gys du Toit of the Dutoit Group, says it is proving very difficult to maintain irrigation during a vital part of the season.

“Our scheduling on the farms and where we rely on bore holes, we need electricity to keep systems going," he explains. "Irregular irrigation hurts the trees and the development of fruit. It is difficult to keep reservoirs full."

To add to the problems, summer rain this week reached the late areas of the Orange River around Upington. This is likely to have a negative effect on the crop.

This week the Tzaneen Dam was only 5 per cent full and supplies to agriculture were recently suspended. These rains will also affect the Orange River and its tributary, the Vaal, which remains the lifeline for the grape growers in the lower Orange River region.

It seems that the country’s electricity woes will not be resolved soon and the government is coming under increasing pressure to deal with long term solutions.

Perhaps the most telling effect is on workers who pick and pack the grapes in the Orange River and get home in the evening only to find that they have no electricity to cook their meals.

“In the morning, when they wake up and want to eat before starting their day, there is again no electricity. This is causing a great amount of tension,” says one grower.