Growing fresh produce in the far north-west of Scotland is no mean feat, but one woman is making it work with the help of an innovative new semi-permanent polytunnel 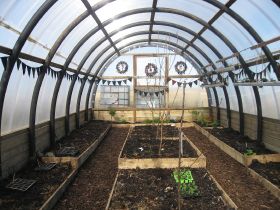 The Outer Hebrides are islands of extremes. Achingly beautiful, but with weather that can turn fearsome with little warning. Wind speeds regularly reach 50mph, and it’s not rare to experience four seasons in one day. Not, one might think, the ideal place to grow subtropical fruit and vegetables.

But that’s exactly what Karen MacLeod is doing. Perched on the coast next to Stornoway airport, the family’s aptly named ‘Allwynds’ croft is home to a polycrub, in which she grows all manner of fruit and vegetables.

Designed and made in Shetland, polycrubs are based on disused plastic tubing from fish farms. The U-shaped tubes are concreted into the ground and the frame then clad with polycarbonate sheets, making for a polytunnel that’s robust enough to cope with this extreme climate.

The 12-metre ridge allows plenty of headroom, while opening windows provide ventilation on warmer days. At Allwynds, Karen and her husband John have a 12x4-metre polycrub with home-made rainwater harvesting, raised beds and a decking area. “We’re completely off-grid, but I can provide my family with at least six months of organic fruit and vegetables,” she says. “There are no food miles, and it’s better for the environment. People are wanting more local food, and to know where it comes from.”

John’s family have crofted this land since his great-grandfather, but he and Karen only moved to the island with their three young children in 2015. While his uncle keeps sheep, Karen wanted to prove that crofting isn’t just about livestock. She started off by creating six large outdoor raised beds, and grew fruit and vegetables under enviromesh to protect against pests and the elements.

Then in January 2019, with the help of SAC Consulting and a 60 per cent grant from the Crofting Agricultural Grant Scheme, she installed the polycrub, in which she grows vegetables like carrots, cabbages, tomatoes, salad leaves and peas; soft fruit like strawberries, blueberries and raspberries; white and black grapes and olives. She has even planted three apple trees alongside pear, plum and lemon trees.

“Last year I was giving away basins of tomatoes around the village, and the raspberry bushes fruited until the end of November – the kids were eating them non-stop,” she says.

Karen has adopted a no-dig system to preserve the natural soil structure and biota, makes her own compost, and covers the soil with local seaweed mulch to keep weeds down and the soil moist. She co-grows herbs and flowers for pest control – with everything grown from seed – and makes her own fermented and preserved food and drink from any surplus. “I like to experiment with things – it’s all part of it.” She also goes into nursery classes to show children how plants grow.

The next stage of the project is to install a second polycrub in which to make better compost. “It’s too wet outside – it doesn’t get hot enough to kill the seeds. We need to feed the land every year, and we also need more space for seedlings,” she says. “I don’t think we’ll ever make lots of money selling veg, but it is enjoyable and shows that a croft is not just for sheep.”