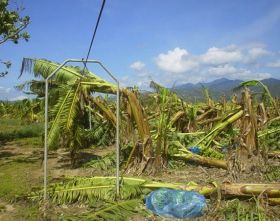 Jamaica Producers (JP) Group has revealed that a resumption of banana exports would depend solely on a change in current weather patterns, following the decision earlier in the year to end production for export to the UK.

Group chairman Charles Johnston said that the company would only consider exporting if the frequency of major storms hitting the island dipped to one every 10 years.

The group opted to end its export programme after Hurricane Gustav destroyed nearly 80 per cent of the country's banana production when it hit in August.

"The decision had to be made because of the weather pattern that has changed in Jamaica," said Mr Johnston. "And believe me, if the weather goes back to us having a hurricane every 10 years, we will be resuming exports of bananas from Jamaica."

As a result of the move to end exports, 460 employees had been made redundant at Eastern Banana Estate Limited in St. Thomas.

The storm was the latest in a long line of hurricanes to hit Jamaica over the past four years, following Ivan in 2004, Wilma and Emily in 2005 and Dean in 2007, all of which required major reinvestment in production.