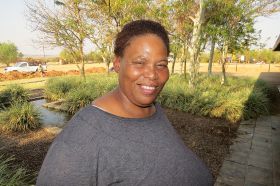 Two years ago on a visit to the Orange River, Fruitnet watched as staff at one of the successful empowerment table grape farms tore up the coveted soccer pitch to install a sea of solar panels to provide electricity for the farm’s cold rooms and packhouse.

“The idea is to make us independent from the national network which has become unreliable and extremely expensive,” said Jeanette Kobonyeng, one of the shareholders at Sonvrucht Farm. “Besides, we can always built another football pitch a bit further away – here we need the space for our operations."

Forward thinking and looking at green technologies is also reflected elsewhere in the fruit industry. At Sonvrucht it was a leap of faith – not knowing that building the solar field would only be the first challenge. Convincing the national electricity regulator that they should be allowed to feed an alternative supply of electricity into the grid, however, was another matter.

Other fruit growers who wanted to do the same thing also had to deal with frustration in their efforts to get registered and not fall foul of the law.

In efforts to protect the national electricity supplier, ESKOM, the regulator, NERSA, has been slow to move on these registrations.

In the Orange River the opportunities for solar farms are almost unlimited. The days on which the hot sun doesn’t beat down on the local inhabitants is few and far between. From November to February temperatures regularly rise above 40 degrees. In short, there is no shortage of sunshine and this shoud be the source of energy for the grape business.

“Some of us first built the solar fields and then proceed to ask for permission or certification, while others like us have waited for the process of regulation to be completed,” said Piet du Plessis of the Karsten Group. “We are now ready to start our first solar farm at Klein Pella not far from Pofadder along the Orange River.

"When the idea of using solar energy in our packhouses first came around, we realised that these building were not suitable to fit equipment on the roofs," he continued. "We had to move to establishing solar farms or fields and bring energy from there into our systems.”

Further to the south, Capespan and its production partners are also focusing on treading lighter on the earth through innovation in the supply chain.

In addition to the recent implementation of a high-tech water filtration alternative, preserving energy resources contributes to a drive to do business in a more sustainable manner.

“As Capespan’s Novo Fruit Packers recognised concerns about climate change and resource scarcity, the business faces the challenge of growing while minimising its environmental footprint," the group stated. "A solar energy project was completed recently with the installation of 2,000 solar panels covering a surface of 4,000m².”

The Novo packhouse is located in Paarl in the Western Cape and is a state-of-the art packing facility servicing topfruit farmers in the Ceres, Villiersdorp, Piketberg, Grabouw and Boland areas.

“As a company that relies heavily on electricity for our production processes, we are very aware of our own footprint and the need to concentrate on devising more efficient processes to reduce our environmental footprint,” said Willem Joubert, general manager at Novo Fruit Packers. The packhouse is one of the largest energy consumption businesses in the Drakenstein Municipal district.

The installation will allow the facility to save approximately 1,150 tonnes of CO² per annum by generating 20 – 25 per cent of the facilities’ own electricity. The system is modular and can be expanded in the future.