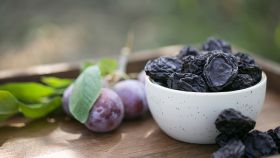 In the meantime, the California Prune Board is working to further raise its profile in the UK market with the distribution of a trade flyer aimed at UK trade members, including importers, wholesalers, manufacturers and retailers.

“They can also be used by manufacturers as a natural fat or sugar replacement, or add value to retailers’ dried fruit categories, as a way to drive incremental, impulse purchases.”

Already this year, California Prunes have been included in a range of products aimed at health-conscious consumers. For example, Colorado-based Four Points chose Californian prunes for its energy bars for their low glycemic index, and South Korean manufacturer Sangsangcho used them in its prune and peach flavoured kombucha drink.