Chile limbers up for another bumper cherry campaign 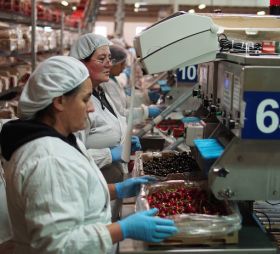 Chile’s 2020/21 cherry crop is expected to weigh in at a massive 310,352 tonnes, or 62.07m (5kg) cartons according to preliminary estimates released by the Asoex Cherry Committee on Monday.

Asoex president Ronald Bown admitted that the sector is braced for a challenging season, mainly because of Covid-19.

“For this reason, the committee has focused on preventing barriers to trade by planning for every eventuality, so that we can act as swiftly as possible,” he said.

“This plan includes procedures and guidelines to protect the health of our workers and the safety of our products.

“We have committed to maintaining the continuity of our operations: we have done so until now and we will continue to do so to ensure quality, healthy and safe food for our consumers.”

China continues to be the main destination for Chilean cherries, especially during the Chinese New Year period, which will be celebrated next year on 12 February, giving shippers a longer export window than last season when the festival fell on 25 January.

“The colour red symbolises hope and good luck, which is why cherries are a favourite to share with family, friends or as a gift,” Bown said.

Around 90 per cent of Chile’s export volume ended up in China last season. However, shippers are intensifying diversification efforts, with fruit also going to the US, Latin America, the Middle East, and various other Asian markets including, for the first time this year, Vietnam.

According to Asoex’s marketing director, Ignacio Caballero, promotional campaigns will be extended to India, Vietnam and Thailand, in addition to China, South Korean, the US and Brazil which were the focus of last season’s marketing efforts.

Chinese promotions will once again centre on the slogans “Enjoy The Red moment” and “Caring for Every Healthy Moment”.

The committee will carry out a range of activities in different channels, tailored to the specific geographic area of China in which they will run.

The campaign will have three phases: the first will run between 1 November and 31 December, before the start of peak shipments and will focus on the media, with a reach of 15 cities.

The second phase will run from 31 December to 12 February 2021 and cover 65 cities, with activities on e-commerce platforms like T-mall, JD.com and Pinduoduo, in addition to retail stores, wholesale markets, greengrocers and specialist stores.

This phase will also feature advertising in places with a high flow of people, such as streets and buildings.

“In addition, we will incorporate live streaming actions, with chefs or well-known figures in China, who will be promoting Chilean cherries live from a retail outlet, inviting people to buy,” Caballero said.

The third and final phase, from 12-24 February, will continue to feature online and in-store promotions, but be especially targeted towards social media such as Wechat. “As many people travel to visit their families during the Chinese New Year period, we’ll also be targeting gasoline service stores and highways,” Caballero said.