Free Trade Agreement welcomed by likes of Blue Skies, with Britain importing £160m of fresh produce from Egypt in 2019 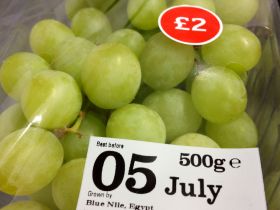 The UK is an important market for Egyptian grapes

The UK has signed a trade deal with Egypt to strengthen political and trade ties between the two nations after the Brexit transition period.

The deal secured between the British Ambassador to Egypt Sir Geoffrey Adams and Egypt’s Assistant Foreign Minister for Europe Badr Abdelatty will give British firms and consumers continued preferential access to the north African market.

The UK government said the agreement will provide tariff-free trade on industrial products, as well as liberalisation of trade in agriculture, agri-foods and fisheries, helping to boost trade and investment.

In 2019 total trade on goods and services between the two countries was worth £3.5 billion. Vegetables and fruit are a major import from Egypt to the UK, last year amounting to £160 million.

The company’s founder and chairman Anthony Pile said: “As a British business that has invested significantly in Egypt over the last 18 years, a continuation of the free trade agreement between Egypt and the UK is of critical importance to Blue Skies.

“The agreement is vital to securing jobs, prosperity, sustainability and indeed driving much needed economic growth in both Egypt and the UK.

“Now, more than ever in the current international climate, we need the security of a seamless continuation of free trade to safeguard the future of our business.”

International Trade Secretary, Liz Truss said: “This agreement is a clear signal of the UK’s enduring commitment to our close bilateral relationship with Egypt and will help strengthen trade and investment ties in the future.

In the past two years the UK Government has now signed or agreed in principle Free Trade Agreements (FTAs) with 55 countries including Chile, Israel and Kenya.