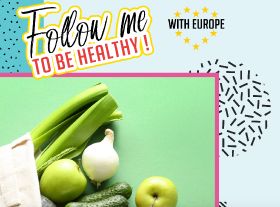 The 'Follow me to be healthy with Europe' campaign has announced a new partnership with six social media influencers for its final twelve months of action.

Launched by Freshfel Europe and Aprifel, the campaign’s aim is to encourage young Europeans to increase their consumption of fruit and vegetables to a minimum of 400g a day, to improve and ultimately transform millennials’ dietary habits.

The Europe-wide campaign has generated over 40m impressions on social media since its launch in July 2019, and aims to build on this achievement in the final year of the project.

“2021 is the International Year of Fruits and Vegetables and thus an important year for the campaign," said Philippe Binard,
Freshfel Europe’s general delegate. "Our online presence allows us to reach a large audience right across Europe as we encourage our followers to take part in the #400gChallenge, to boost their fruit and vegetable consumption throughout the year."

For this reason, the online element of the campaign has been bolstered by expanding online partnerships.

In 2021, six high-profile European social media influencers will be involved in promoting the campaign, including Spaniard Carlos Rios, German Denise Schuster, Italian Luisa Ambrosini, Polish lifemanagerka and French Clemfoodie and Gaëlle Prudencio, while more collaborations will also be announced in 2021.

These partnerships aim to show that eating a diet high in fruit and vegetables is not only healthy but also delicious, easy to achieve and fun to experiment with.

“Working with European influencers is a great way to carry our message across borders," said Mathilde Fléchard, Aprifel’s European project manager It allows us to reach different communities, even young people who would otherwise not necessarily pay attention to health and nutrition."

While increased online activities have proven a success, the campaign hopes to attend physical events again once it is safe to do so.