Aguacastur has invested in a 1.5ha trial farm in Asturias and believes the fruit could thrive on Spain’s northwestern coast 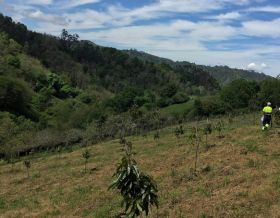 Asturias could become the next source of Hass avocados as plantings of the green gold continue to extend throughout the Iberian Peninsula.

Spain has around 14,000ha of avocado production in 2019, mostly located around Axarquía de Málaga and Granada’s tropical coastline in the south. More recently, new farms have sprung up in other Mediterranean areas such as the Canaries, Alicante, Valencia, Cádiz and Huelva.

Now a new company, Aguacastur, has developed a cultivation system adapted to the soil and climatic conditions in the Asturias region on Spain’s Atlantic coast.

Andrés Ibarra and Javier Cívicos set up a 1.5ha trial farm in the Asturian village of Valbuena, in the Cabranes council.

“Initially the project was to set up to see a how the plants would evolve with different types of management,” Ibarra told Traveler magazine. “But the interest that this crop has aroused has encouraged us to make ourselves known and help other people to get started in subtropical fruit growing in the north.”

Ibarra believes avocados can thrive in Asturias thanks to the region’s diverse microclimates.

Aguacastur assesses an area’s suitability for avocado production, as we as offering technical advice on planting, design, farm maintenance and inputs.

According to Ibarra, the entire north and northwestern strip of the Spanish peninsula (from the coast to around 15km inland) has potential for growing avocados as the thermal currents from the sea protect the land from the floods, winds and frosts which are common features of the northern Spanish climate.

He believes that the crop could provide a viable alternative for local producers and help prevent the depopulation of rural areas of Asturias and the neighbouring regions of Cantabria, Galicia and even the Basque Country, where trial production is reportedly also underway.