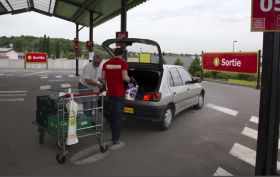 The first products to be sold individually are tomatoes, traditional vegetables and Roscoff onions, according to the company, with a minimum fruit weight and number of pieces per pack guaranteed.

“Fruit and vegetables have huge potential for development in drive," marketing manager Sylvie Tassin told FLD. "At the end of 2020, drive had a 5.9 per cent share of the fruit and vegetables market, compared with an average of 10 per cent for consumer products. With this in mind, Prince de Bretagne is launching an offer specifically dedicated to drive. The novelty is that vegetables are sold individually, with packs of tomatoes (cluster, fleshy, Olivine, Aumônière, San Marzano) and Roscoff PDO onions containing a specific number of pieces."

According to commercial manager Yannick Rannou, the goal is to respond to new consumption habits.

"More and more consumers are turning to online cooking sites which, in their recipes, often specify two tomatoes or three onions rather than their weight," said Rannou. "There are also more and more small households of one or two people who do not necessarily want to buy large volumes because they want to limit wastage. However, Drives do not know how to sell products they have bought by the kilo individually. This offer, adapted to remote Drives, makes it possible to limit overpacking."

With a large share of vegetables being packed on-farm, some adaptations were also needed to the packing lines in order to guarantee a fixed weight per unit and ensure traceability from the farm to the consumer.

The individual range of vegetables is supplemented by smaller packs of old vegetables, such as 500g trays of parsnips, Jerusalem artichokes, Boule d'Or turnips or tuberous chervils, as well as 750g trays of coloured carrots.