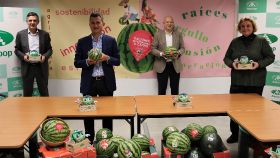 Announcing the forecast for its flagship product as the first shipments got underway this week, the company said the incorporation of new member SAT Costa de Almeria, together with an increase in planted area in La Mancha, would enable it to ramp up production at the beginning and end of the season.

The emblematic striped red watermelon continues to spearhead Anecoop’s seedless watermelon offer, making up around two-thirds of the total sales volume. This year will also see a doubling in production of black-skinned watermelons in response to strong market demand, according to commercial director Miguel Abril.

Abril noted that the company’s Premium Bouquet range is also set for significant expansion following its successful launch last year, with the volume of fruit marketed under the high-end label climbing from 2,000 tonnes to 4,000 tonnes.

The label will also be extended to melons this year with the introduction of Piel de Sapo Bouquet Premium melons from this summer. “The aim is to harness the popularity of the premium black label and use it as a springboard for growth in the melon category,” Abril explained.

Organic watermelon volumes, meanwhile, are expected to top 10,000 tonnes for the first time this year as part of the company’s ongoing commitment to sustainability.

The Bouquet season will be supported by an €850,000 marketing campaign covering the national market as well as France and the Czech Republic.

Building on last year’s “Raciones de vida para el campo” (Slices of life for the field) campaign, which highlighted the essential role of agriculture in maintaining rural life and the environment, this season’s “Raciones de Emoción” (Slices of emotion) promotion celebrates the success of Spanish growers and the cooperative model in keeping the country’s citizens fed during pandemic.

“We wanted to highlight the more exciting, emotional aspects of life, which has become a bit grey,” explained marketing manager Piedad Coscollá.

“Our goal is to connect with greatest number of households, reflecting the constraints that people find themselves in due to the pandemic.”

Echoing the theme of this year’s campaign, Anecoop president Alejandro Monzón described the past year as “a historic year, in which we have managed to work with the perfect balance: with the heart in every home but with the head and the feet on the ground that we cultivate – emotion and reason”.

Launched almost 30 years ago, Bouquet seedless watermelons helped transform Anecoop from a citrus company to leading supplier of a Spanish-grown fruit and vegetables.

According to general director Joan Mir, the product has become synonymous with the company’s evolution.

“We showed our grower members how they could increase their profits, be innovative and launch a new product that consumers love and appreciate,” he said.