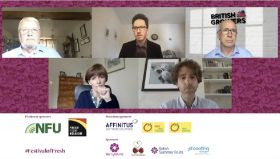 More than 650 delegates from over 40 countries joined the first-ever Festival of Fresh to celebrate and discuss the UK fruit and vegetable sector.

Organised by the Fresh Produce Journal and supported by the NFU, British Growers, British Apples & Pears, British Summer Fruits, the National Fruit Show and the Worshipful Company of Fruiterers, the online event on 13 July covered topics from production and trade to marketing, retail, the Road to Net Zero, science, technology, and better business.

Kicking things off, a panel debate of industry leaders featuring Lee Abbey (NFU), Ali Capper (NFU/British Apples & Pears), Nick Marston (British Summer Fruits) and Jack Ward (British Growers) expressed grave concerns over the slim margins currently being earned in the fresh produce sector and the impact this could have on the future of the sector. They called on retailers to ensure returns allow for reinvestment and for the industry to take advantage of the many opportunities it currently faces.

Defra minister Victoria Prentis insisted the government is doing all it can to help ease fears over shortages of pickers and HGV drivers, and expressed confidence that UK horticulture is well placed to increase domestic production post-Brexit.

But there are still issues to iron out, with Crop Protection Association chief executive Dave Bench fearing that growers of speciality crops may struggle to secure the inputs required to make growing feasible.

A session focused on The Great Health Opportunity saw Marcela Villarreal of the UN’s FAO outline the strategies and objectives of the International Year of Fruit & Vegetables, before Veg Power boss Dan Parker outlined the excellent work the campaign is doing with schools as he showcased the latest Eat Them to Defeat Them ad.

Putting the attention on sustainability, Caroline Drummond of LEAF outlined the valuable work her organisation is doing to help farmers on the road to net-zero production, while Protium’s Chris Jackson explained how hydrogen could become a key energy source for fruit and veg production going forward.

A lively retail session saw Kantar’s Joe Shaw Roberts and industry analyst Bryan Roberts give their take on how the supermarket sector is performing, before Chris White met M&S trading managers Lisa Raschia and Amy Lance to get a feel for the retailer’s new fresh produce department.

Elsewhere at the event, a series of PhD presentations gave an exclusive view into some of the valuable scientific work taking place at Lincoln, while a series of one-to-one conversations gave an insight into the lives and businesses of some of the leading figures in both the UK and global fresh produce industry.

Festival of Fresh programme manager Michael Barker said: “It was wonderful to see so many people from both the UK and around the world come together for a day of conversation, debate and presentations, sharing their expertise on how we can take this amazing industry forward. It’s been a terrific day, and I hope everyone has taken a huge amount of value from what they’ve heard.”

For detailed reports of the Festival of Fresh, see fpj.co.uk over the coming days.