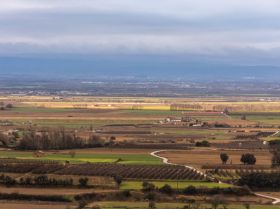 Scientists from international research centres, universities, and meteorological and space agencies have descended on the Pla d’Urgell region of Lleida in northeastern Spain to study the effects of climate change on demand for water for crops.

Organisations including NASA, the European Space Agency, France’s National Centre for Meteorological Research will be spending the summer studying how agriculture in a semi-arid climate affects different meteorological variables, and how weather forecasting and climate prediction models for such regions can be improved.

Led by France’s National Centre for Meteorological Research (CNRM) and involving a number of Catalan institutions, including the Institute of Agrifood Research and Technology (IRTA) and the Meteorological Service of Catalonia (SMC), the mission in question is part of the LIAISE (Land surface Interactions with the Atmosphere over the Iberian Semi-arid Environment) project, which was presented this week in Mollerussa and Linyola.

In Pla d’Urgell and the Mediterranean basin’s other semi-arid regions, water evaporates faster than it does elsewhere as a result of crop type heterogeneity and irrigation, and can affect the atmosphere, altering rainfall and low cloud formation.

“Current weather forecasting models are not completely accurate in such semi-arid regions, so we need to find out more about how different land uses interact with the atmosphere and evaluate their impact on the processes that generate clouds and summer storms,” said Josep Ramon Miró from the SMC’s Applied Research and Modelling Division. Furthermore, there is a shortage of data showing how to manage irrigation in such regions in a future marked by climate change, where fresh water for crops will be in greater demand but shorter supply.

“We must learn to manage water and we need technological tools that tell us more precisely how much of it we will be able to use in an increasingly dry future,” explained Joaquim Bellvert, a researcher from IRTA’s Efficient Use of Water in Agriculture programme.

“We also need to evaluate the effects of dams and river flows on local climate and what they will be in a climate change scenario.”
IRTA’s specialised knowledge of irrigation and the involvement of local people were key factors in the choice of Lleida’s agricultural model for the studies the international mission entails.

“Pla d’Urgell is a semi-arid region with many different types of crops and a wide variety of irrigation systems; it is an ideal setting for improving the climate prediction and irrigation models we need and extrapolating them to a global scale,” said Joan Girona, IRTA’s institutional representative in Lleida and the Pyrenees.

“Catalonia is perfectly suited to international research campaigns of this kind due to the density and quality of the SMC’s observation and remote-sensing networks,” added Eliseu Vilaclara, director of the SMC.

“This underlines the worth of the experimental campaigns the SMC has been carrying out since the early 20th century; 2021 is actually our centenary year.

“We hope this project will enhance our working WRF mesoscale model thanks to improved characterisation of evapotranspiration and precipitation in transition areas between dry and irrigated land.”

How can the water crops consume be quantified?

Images from some satellites can be very useful for quantifying the water crops consume — referred to as evapotranspiration — and surface soil moisture.

“The campaign will therefore also involve evaluating different remote-sensing techniques for obtaining more precise information and achieving even greater efficiency in water management, with a view to ensuring the global sustainability of production and environmental systems.”

To that end, NASA, SAFIRE and the ESA will be flying aircraft equipped with thermal, radar and hyperspectral sensors over the region in the coming days to calculate evapotranspiration, surface soil moisture and crop photosynthesis levels.

The information obtained will be used for future space missions. IRTA, meanwhile, will be contributing to validation work by taking measurements on the ground, in addition to using the images provided to validate existing satellite image-based models of the region’s evapotranspiration, with the aim of subsequently being able to forecast water demand.

The other equipment installed in the various study areas in Pla d’Urgell makes it possible to measure the amount of water used for crops, as well as to characterise the behaviour of different meteorological variables at different heights in the atmosphere, from soil level to the boundary layer.

The equipment in question notably includes IRTA’s lysimeter station in Mollerussa, one of the few set-ups of its kind in the world, which measures crop water consumption by means of a weighing system.

There are also a number of eddy-covariance flux towers and scintillometers, which can be used to measure water and carbon dioxide fluxes and determine their directions. Other instruments, including WindRASS or UHF equipment, use ultrasound to take vertical wind and air temperature measurements at different heights.