The power of the supermarkets came under the spotlight in a recent Dutch report, which illustrated the importance of transparency to achieve sustainability 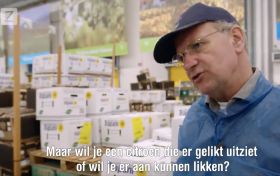 Last month, an investigative report on Dutch TV looking at how supermarkets can increase sustainability in the food supply chain evoked a strong reaction on social media, according to Netherlands-based organics supplier Eosta.

Eosta CEO Volkert Engelsman contributed to the programme, along with Dutch minister of agriculture Carola Schouten.

“Minister Schouten expressed disappointment about the efforts made by supermarkets and was clearly a proponent of a tax on ‘less sustainable products’ in supermarkets,” Eosta stated. “She wants to use the yield from this type of tax to support farmers who wish to operate more sustainably.”

Engelsman argued for more transparency on the impact of food on the environment, bemoaning the supermarkets’ apparent unwillingness to do so.

"Let’s start informing consumers about the effect of their purchasing behaviour on people, society and the environment,” he said during the programme. “There is an urgent need for honest information that enables consumers to make informed purchasing decisions. Failure to do this is taking people for a ride.”

However, the Zembla report, titled "Supermarktmacht" (Supermarket Power), showed how some supermarkets resist greater transparency on the sustainability of organic fruit and vegetables. The programme also demonstrated how cheap supermarket meat effectively shifts responsibility for sustainable choices onto consumers.

The tax proposed by Dutch minister Schouten would aim to make sustainable products like organic fruit and vegetables cheaper, while raising the price of less sustainable items, including meat – a True Cost Accounting approach long advocated by Eosta.

Investigative journalist Ton van der Ham noted Engelsman’s fervour. “You are getting a bit angry now,” he pointed out.

“Yes, hello!” Engelsman replied. “The goddamned planet is on fire!”