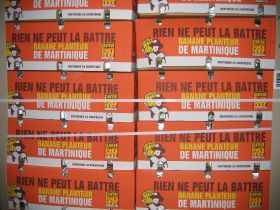 Bananas from the French West Indies finally returned to France last week following a hiatus of around eight months. Devastated by the ferocious winds of Hurricane Dean last August, Martinique suffered the complete loss of its precious banana plantations, while Guadeloupe lost upwards of 50 per cent, leaving a large void on the European market.

Having lost market share to various competitors, the islands’ producers are now looking to regain a foothold in the European market. Prior to the hurricane, Guadeloupe and Martinique enjoyed a market share of 40 per cent in France and 5 per cent in Europe.

According to reports, the CMA-CGM Fort Saint-Pierre docked at France’s port of Dunkirk on 6 April, carrying around 4,500 tonnes of bananas: including 3,500 tonnes from Martinique, 510 tonnes from Guadeloupe and 440 tonnes from Suriname.

A weekly volume of 5,000-6,000 tonnes are expected to be delivered to Dunkirk until next July. However, full capacity will not be reached until 2010, according to the islands’ union of banana producer groups UGPBAN.