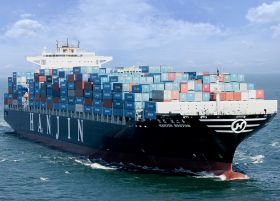 Hanjin Shipping has announced that it is restoring freight rates on its Asia-Europe trade lines, following in the footsteps of groups including Maersk Line, Evergreen and Mediterranean Shipping Co.

Rate restorations for shipments from Asia (Far East, South East and IPBC) to North Europe/Mediterranean destinations is US$200 per TEU and US$400 per FEU, the group revealed, to come into force on 14 December 2009.

Increases on Middle East to North Europe/Mediterranean services are US$150 per TEU and US$300 per FEU.

"Though we are trying to reduce costs by all means it is inevitable for us to restore freight rates in order to maintain the quality of service for our customers," Hanjin said in a statement.

Meanwhile, the member lines of the AADA have announced that the bunker surcharge level for shipments from China and Hong Kong to ports in Australia are to be adjusted to US$400 per TEU and US$800 per FEU for dry and refrigerated containers, with effect from 4 December 2009, while shipments from Taiwan will be effective from 19 December 2009.