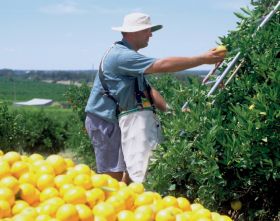 Australian citrus exports to the US kicked off last week, but industry officials are warning that increased fuel prices and adverse exchange rates will eat into grower returns this year.

Steve Allen of Riversun, which coordinates the Australian citrus programme to the US market, told Americafruit Magazine that shipping costs have increased substantially as a result of the ever-increasing price of oil, while the Australian dollar has appreciated versus the greenback to reach around US$0.94, compared with an average of US$0.86 last year. "Together, these factors have added around US$3 per carton to the cost of our fruit, but this cost has to be absorbed by the growers as there is no way of passing it onto the market," he said. "As a result, grower returns will be down significantly."

Riversun has elected to export all fruit in containers this year, rather than using conventional reefer vessels as it has done in the past, because charter rates have increased by at least 25 per cent versus last year. While the rising oil price has hit both container lines and reefer operators, Mr Allen said that container shipments had emerged as the more economical option. "Often the conventional reefer vessels have to bunker 32-44 days to Australia with no paying cargo whereas containers can carry product back and forth," he noted.

Riversun has been forced to change its warehousing and transport systems to accommodate the shift to containers, but Mr Allen said there are some key benefits. "We can make weekly sailings with containers, and consumers in the US will be seeing fresher fruit, as stocks will be turned over every week," he pointed out.

Australia's exports to the US will be down by around 25 per cent on last year’s programme due to the impact of the ongoing drought. "We expect to send around 1.3m cartons of navel oranges and 400,000 cartons of easy peelers," he said. "The fruit is looking pretty good and we have good maturities and decent fruit size. We’re just waiting for colour, but that will come in the next few days."

The first shipments are set to land at the Port of Long Beach, California, in early July, with arrivals continuing into October.

Mr Allen said South Australian growers had spent US$46.7m on water to supplement their drought-hit allocations, and warned that disaster looms for southeastern Australia unless there is significant rainfall in the coming months.