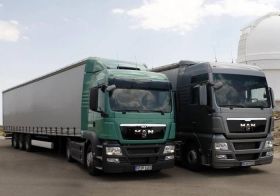 The lorry driver used a magnet to jam his tachograph

A fresh produce lorry driver has been fined £900 after attempting to fake a record of his hours behind the wheel.

The Portuguese driver was heading towards the Midlands when he was stopped during routine checks on HGVs at Harlow, near junction 7 on the M11.

Police found that he had used a magnet to stop his tachograph, used to monitor hours spent on the road, so it appeared he was resting when he was actually driving.

The refrigerated lorry carrying Portuguese fruit and vegetables was confiscated while its driver was investigated.

However, officers then called the distribution company in Portugal to organise an alternative local lorry service to pick up the delivery, ensuring that it reached its destination on time.

A spokesperson for Essex police said that the refrigeration unit was maintained at all times.

“The only offending part of the truck is the driver and the tractor unit. We can confirm that the owner managed to find another tractor unit and the produce was delivered to its destination,” he said.

PC Al Cuthbertson, of the Commercial Vehicle Unit, said: “All heavy goods vehicles must be fitted with a tachograph by law to ensure that drivers do not exceed the legal maximum number of hours at the wheel and to ensure that they take adequate rest breaks.

“Some drivers have been tempted to use magnets to stop tachos to give the impression that they are resting when in reality they continue driving, possibly to meet deadlines for reaching ferries or their destinations.

“This is an extremely dangerous practice as long hours mean tired drivers and tired drivers have killed or seriously injured other road users. Serious collisions involving tired drivers also cause travel disruption to the road network.”

Adam Pipe, manager of the Essex Police Casualty Reduction Section, which includes the Commercial Vehicle Unit, said: “Some of the most tragic road traffic collisions involving multiple loss of life over the years have been as a direct result of commercial vehicle drivers driving in excess of their permitted hours.

“The proactive work carried out by Commercial Vehicle Unit and Casualty Reduction Section strengthens our efforts to take positive and robust action against offenders in an effort to make our roads safe.“

In addition to the fines, the driver was banned from the roads for a further 45 hours.