Staff claim non-wild, high-sugar bananas produced for humans are as bad for primates as eating cake 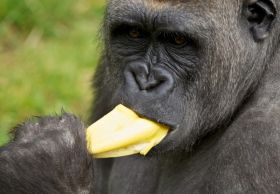 Monkeys at a West Country zoo have been banned from eating bananas – because they are too unhealthy.

The Western Daily Press reported that animal nutritionists have likened giving bananas to the primates at Paignton Zoo, Devon, to humans eating too much cake and chocolate.

Amy Plowman, head of conservation and advocacy, said: “People usually try to improve their diet by eating more fruit - but fruit cultivated for humans is much higher in sugar and much lower in protein and fibre than most wild fruit because we like our fruit to be so sweet and juicy.

“Giving this fruit to animals is equivalent to giving them cake and chocolate.

“Compared to the food they would eat in the wild, bananas are much more energy-dense – they have lots of calories – and contain much more sugar that’s bad for their teeth and can lead to diabetes and similar conditions.

“It can also cause gastrointestinal problems as their stomachs are mostly adapted to eating fibrous foods with very low digestibility.”

Dr Plowman, the Western Daily Press reported, said it had not been too hard to wean the monkeys off bananas and give them vegetables instead: “We reduced the amounts slowly so they had a long period to get accustomed to their new diet,” she added. “They didn’t get a choice but – unlike children – they couldn’t complain."

Now, a typical diet for a monkey at the zoo features lots of green leafy vegetables, smaller amounts of other vegetables and as many leafy branches as possible.

Animals do still get bananas if they are unwell, though, and the keepers use them as a Trojan horse for medication.

Paignton Zoo’s fruit-free diet is bringing improvements in physical health and changes in some behaviours, the Western Daily Press reported.

Senior head keeper of mammals, Matthew Webb, said: “We have noticed an improvement in the condition of primate coats – in particular the colour and thickness of the fur of the Sulawesi crested black macaques.

“Smaller monkeys such as tamarins and marmosets are highly-strung animals and live in tight-knit social groups which can be quite aggressive at times. Reducing the sugar in their diets has calmed them down and made their groups more settled.”