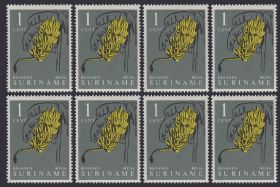 Leading European fresh produce company Univeg has tied up a deal with the government of Suriname to purchase a majority stake in the country's publicly-owned banana export company Stichting Behoud Bananensector Suriname (SBBS), taking it into private ownership.

The agreement, confirmed jointly by Suriname's agriculture ministry and Univeg, sees the Belgium-based group acquire 90 per cent of SBBS, with the South American coastal republic retaining 10 per cent of the shares.

SBBS, which operates around 2,000ha of banana production in Suriname and has a turnover of US$65m, will begin operating under a new name, Food and Agriculture Industries (FAI).

The privatisation process was organised under an International Tender Rule process where the EU acted as an observer.

Surinamese agriculture minister Hendrik Setrowidjojo commented: "The Republic of Suriname has as policy to sustain the banana sector for the long term and to safeguard the employment in this sector.

We are pleased that through the international tender a long term partner such as Univeg was selected as an investor and we look forward to a fruitful relationship together. In selecting Univeg we found a good home for the future development and marketing of the Suriname banana."

Univeg chief executive Francis Kint said that securing a reliable source of bananas in the Caribbean would benefit the group's customers.

"The business reasons for this acquisition are in line with Univeg's continued strategy to secure long-term sourcing requirements to optimally service its retail customers," he explained. "Univeg is aware of its responsibilities towards the local communities and believes in the huge potential of FAI as a leader in sustainable agricultural practices and positive social impact."

SBBS was founded in 2004, resuming production after a two-year hiatus that followed the bankruptcy of its previous incarnation Surland.

Since then, Univeg Katopé Agrisol – part of Univeg France – has also made large-scale investments in Suriname to develop SBBS's role as a key supply partner.

Nicolas Morinière, managing director of Univeg France, said: "This is a logical step as Univeg has been a business partner of SBBS – revitalised with help of the EU and operational since 2006 - through its subsidiary Univeg Katopé Agrisol.

"We are proud to have been selected in this process. Suriname has great assets for the production of tropical products, such as a skilled workforce, ideal climate, soils and luminosity."

Since the start of the millennium, the EU has provided the country's banana growers with millions of euros in subsidies to help them expand irrigation systems that serve plantations and to restructure the export industry.