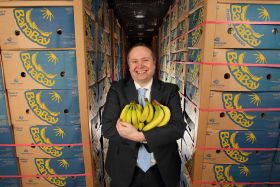 Banana brand BanaBay has reported further dramatic growth during the first quarter of the year, having secured a series of new contracts.

The firm, which has a plantation in Ecuador but is headquartered in Birmingham, in the UK, more than doubled the number of containers it ships globally from 20 containers per week to 53 – the equivalent of approximately 5.7 million bananas per week.

Since appearing at Fruit Logistica earlier this year, BanaBay has made strides forward with European customers, with new contracts starting in Italy, Poland and Greece.

In Poland, BanaBay has quickly increased shipments to 10 containers a week following the success of initial trials.

In other parts of the world, BanaBay has opened up new markets in China and North Africa, established its first major customer in the US and has enjoyed increasing volumes in New Zealand.

These achievements have put BanaBay well on track to hit its mid-year target of 70 containers per week.

BanaBay MD, Mark O’Sullivan, said: “Our strong volume growth seems set to continue; our attendance at Fruit Logistica generated tremendous interest in BanaBay and we look forward to Asia Fruit Logistica later this year, where we have ambitious plans to build on our presence in China and develop new markets in the Asian region.

“Based on performance to date, we expect to double our volumes again by the end of 2014 – no small achievement for a new brand launched only eighteen months ago.”