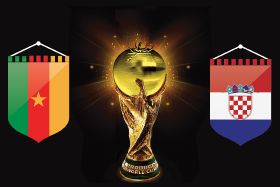 Fruitnet.com's partner publications FRESH PRODUCE JOURNAL, EUROFRUIT, ASIAFRUIT and AMERICAFRUIT have teamed up to publish a series of special interviews to coincide with the FIFA World Cup, featuring a member of the fresh produce industry from each of the 32 nations involved in the tournament.

Today it's Bakari Tata, who grows tomatoes and peppers on around five hectares of land in his native Cameroon, and Neven Kurtovic of Univeg Croatia, ahead of their teams' Group A clash tomorrow (18 June):

Neven Kurtovic: We are a ‘bridge’ between Univeg sources worldwide and the end customer in the area of south-eastern Europe, as well as a bridge between the growers from SE Europe and the rest of the EU market via the Univeg network.

BT: The World Cup is the best football tournament in the world, as it allows us to discover the global champion. It is a time for us Cameroonians to all come together around our football team regardless of our ethnicity or profession.

NK: As a small country of just 4.2 million people, being in Brazil among the biggest and strongest football countries is already a success. This gives us a chance to increase our visibility, market our tourism industry and finally gives us an additional motivation to fight on the global market.

BT: As a champion of the farming sector, I want the Indomitable Lions of Cameroon to do as I have done and win the competition to become world champions. But I must not delude myself as our players are not invincible and our team has not won much since the death of footballer Marc-Vivien Foé (the former Manchester City midfielder who collapsed on the field during a Cameroon international match in 2003 and later passed away). That is why I no longer enjoy watching Cameroon’s games so much.

NK: It is important for Croatian players to show a high level of motivation and excellent team-work. Having this in combination with the experience of players like Luka Modrić, of Real Madrid, Mario Mandukić, of Bayern Munich, and Ivan Rakitić, of Sevilla (but on his way to Barcelona), Croatia can go as far as the final.