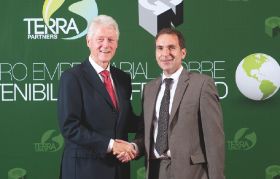 Sylvain Cuperlier pictured with former US president Bill Clinton at the Forum on Sustainability and Happiness, which was held in Costa Rica in May 2012

Fresh produce marketer Dole is in the process of restructuring its sustainability and corporate social responsibility activities worldwide following a decision to integrate what was a separate, dedicated department into other core parts of its business.

The dissolution of that unit has prompted the departure of Sylvain Cuperlier, Dole's vice-president of worldwide corporate responsibility and sustainability, who in effect had been left as a single-person department following the recent departure of sustainability director Roberto Vega. He joined Syngenta in March as head of product policy and performance.

"Today is my last day at Dole after over 16 years with the company," Cuperlier confirmed in a statement. "Starting tomorrow (1 July), the corporate responsibility and sustainability responsibilities will be split among various departments located in several divisions."

Cuperlier's leadership on ethical and environmental issues has seen Dole transform the way it manages its corporate responsibility and sustainability programmes over the past decade, sharpening its focus on improvement in areas such as water, carbon, soil conservation and packaging.

Responsibility for the various processes and policies he oversaw will now be split across a number of other departments. Dole Europe's director of marketing and communications Xavier Roussel will take charge of policy and implementation in the market, supported by the group's various heads of division and team members in Latin America.

"There will no longer be a worldwide department for CSR and sustainability," confirmed Roussel. "However, we continue to have a strategy in place. These topics are becoming more  and more important for our customers, especially in the US over the past three or four years."

He added: "Whereas before Sylvain effectively was the department, what we plan to do now is embed his responsibilities into our divisions and allow the Latin Americans to take ownership of CSR programmes. We've transformed things massively when it comes to areas like certification and all of the stakeholder commitment we've been able to build up is going to stay the same."

Dole Europe recently made a very public commitment to making all of its fresh produce imports fully sustainable by 2020.

At the end of May, it signed a special covenant known as the Sustainability Initiative Fruits and Vegetables (Sifav) and certified idependently by Netherlands-based group IDH.

"We're fully focused on [achieving this goal] and committed to being fully sustainable in our banana and pineapple production by 2020," Roussel explained.

By agreeing to the covenant, which has the backing of Icco, Solidaridad and Frugi Venta, large retailers and brands commit to have 100 per cent of their fruit produced in a sustainable manner within the next six years.

Joost van Oorthuizen, general director of IDH, welcomed Dole's involvement in the scheme: "We are very pleased to be working with Dole, a leading fresh fruits provider that has Corporate Social Responsibility so high on its agenda. We believe and hope that this incentivises producers to follow in Dole's footsteps and become more sustainable."