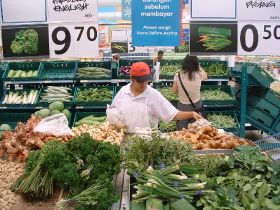 Tesco Lotus has announced it will target a 15 per cent growth in Thai exports this year, focusing on emerging markets like Malaysia, reports The Nation.

The Thai branch of the UK-based retail giant wants to build on its success in exporting Thai products to Tesco stores across Europe and Asia, Tesco Lotus’ corporate affairs director Salinla Seehaphan told The Nation, adding it would ramp up its exports of fruit, seafood and stationary that came to a total export value of Bt3.2bn (US$98.7m) in 2013.

“This year, we are working to increase exports of Thai seasonal fruit to Malaysia, as Thai food is very popular among Malaysians,” Salinla told The Nation. “Tesco is a major retailer in Malaysia, so its stores are a great channel to promote and distribute Thai products.

As well as exporting fresh fruit, Salinla said Tesco Lotus was also working on building exports of high quality stationary and air-freshener for cars. "As one of the world's leading retailers, we hope to use our expertise to help Thai businesses successfully enter the global market," said Salinla.

Tesco operates 49 hypermarkets across Malaysia since opening in 2002 and launched its online store in 2011.