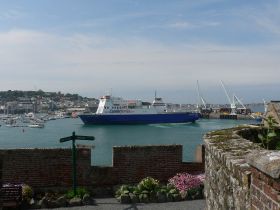 Condor Ferries has signed a ten-year licence to run ferry services between Jersey, the UK and Guernsey.

The non-exclusive agreement with Jersey Ports allows the company - which transports fresh and frozen produce - to operate passenger, vehicle and freight services until 2024.

Condor says the agreement means it can invest in a new, larger fast ferry at a cost of £50 million.

Guernsey's government, meanwhile, has also agreed to extend a 'memorandum of understanding' with Condor until 2018.

And according to BBC News, Jersey officials have negotiated a get-out clause that comes in after seven years if services are not running as expected.

The same news outlet reported that senator Alan Maclean, Jersey's economic development minister, has previously said other ferry operators were welcome, but would have to provide the same level of service as Condor.