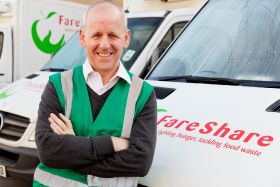 The President of Malta will be visiting food redistribution charity FareShare UK this Friday (19 September), as Malta prepares to open its first Food Bank to fight food poverty.

Her Excellency, Marie-Louise Coleiro Preca, will see FareShare’s main warehouse in Blackhorse Road, Deptford, London, between 10am and 12pm to find out how surplus food is being used to support people in the UK living in poverty and social exclusion.

FareShare, which recently marked 10 years as an independent charity, redistributes surplus food from the food and drink industry to nearly 1,300 UK charities and community organisations.

The charity is a member of FEBA (European Federation of Food Banks), which currently brings together 256 food banks in 21 countries to fight hunger and food waste. Guided by FEBA’s 30 years of experience of foodbanking in Europe, the Malta Food Bank Foundation plans to open the country’s first food bank in the coming months with the support of the president.

Lindsay Boswell, CEO of FareShare, said: “FareShare has been working with leading supermarkets and suppliers in the UK for over 20 years to rescue good food from going to waste and redirect it to charities in the UK. Over the past decade we have redistributed enough surplus to provide over 67 million meals for people in need.

"Local charities and community organisations save money feeding people in food poverty and we stop surplus food from ending up in landfill.

“We’re very pleased and honoured to show Marie-Louise Coleiro Preca the successful FareShare model and our social impact.  Both countries can learn from each other and it is also very inspiring to meet Her Excellency, who is personally supporting an important social project to help people in poverty.”

The president will tour the FareShare UK central depot in London, see volunteers prepare the food orders for charities across the capital, learn how good food is given to those in need and find out how FareShare UK gained support from the UK food industry.

The Malta Food Bank Foundation is opening the country’s first-ever food bank to help people in Malta.  Irene Schembri, chair of Malta Food Bank Foundation, said: “Marie-Louise Coleiro Preca is very enthusiastic about the project of creating a food bank in Malta, and will assist the foundation in the process to set it up from helping us to secure warehouse premises, to lending her support at meetings with Malta’s food chain industries to gain the support of key partners such as food importers and producers.

“We are very pleased that she’s able to visit FareShare UK to witness their work and get an understanding of the impact we can aim to have on the community and the environment in Malta.”

Preca said: “I have made a commitment to lead the fight against poverty and social exclusion in Malta. My support and involvement in the Malta Food Bank shows that we are moving from rhetoric to action, to truly make a difference in people’s lives. The Food Bank is just one of several initiatives currently being undertaken."