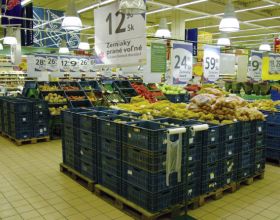 In revealing its preliminary results for 2014/15 today (22 April), Tesco has also demonstrated a weakening of its European business through the full-year period.

The retailer admitted its European performance had been 'disappointing', with group trading profit for the region down 31.9 per cent at actual exchange rates (31.1 per cent at constant exchange rates) to £164m.

Indeed, it followed a wider trend at the company - overall trading profit fell 68.4 per cent to £961m.

European sale across the group's various markets - including the Czech Republic, Hungary, Poland, Slovakia,Turkey and the Republic of Ireland - came to £9.898bn, down 8.5 per cent year-on-year at actual exchange rates.

"Overall, our trading results in Europe were behind our expectations," the group statement read. "Whilst we saw some improvement in the fourth quarter, the like-for-like sales performance was mixed over the course of the year.

"We have seen strong competition from discount retailers and this held back our sales performance, particularly in Ireland which saw a like-for-like sales decline of 6.3 per cent. Whilst the majority of our markets have seen negative currency impacts, this has been particularly marked in Europe as the euro fell to seven-year lows against sterling by year-end."