In the UK since 1980, ice cream prices have fallen by 50 per cent, while fruit and vegetables have gone up by 199 per cent, ODI claims 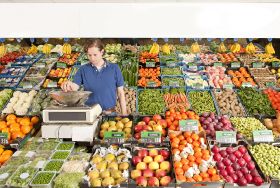 People in newly-rich countries struggle to eat a healthy diet because some common processed foods like cakes and biscuits have become cheaper, while at the same time, the prices of fruit and vegetables have gone up, the ODI argues.

The ODI study, ‘The rising cost of a healthy diet’, which looked at relative food retail prices in Brazil, China, Korea and Mexico - the first of its kind in emerging economies - found that fruit and vegetables rose in price by up to 91 per cent between 1990 and 2012, a price hike higher than other any other food group. On the other hand, some processed foods, like ready meals, dropped in price by up to 20 per cent.

- In Mexico, where almost 70 per cent of adults are overweight and obese, ready meals have become cheaper and the cost of green vegetables has increased since 1990.

- In Brazil, where the prevalence of overweight and obese adults has doubled since 1980, crisps, biscuits, energy bars and sugary drinks formulated to be ‘hyper-palatable’ are much more widely eaten than previously.

- In China green vegetables have become twice as expensive over the last 20 years.

- In South Korea, the price of cabbage, a common ingredient of traditional dishes such as kimchi, has risen by 60 per cent.

ODI researcher and report co-author, Steve Wiggins, said: “In Brazil, the consumption of ‘ultra-processed’ ready-to-eat food has risen from 80kg per person per year in 1999 to around 110kg per person per year by 2013. Using the weight of the food as a measure, this is equivalent to each person eating an extra 140 Big Macs a year."

The report's authors said the rising cost of fruit and vegetables may be due - in part - to cutting-edge technologies that result in higher-quality vegetables that are cut, trimmed, bagged and washed, and available all year round.

Advances in food manufacturing and falling costs of transport and logistics could explain the drop in prices of some processed foods such as noodles, ice cream, crisps and cookies.

Wiggins added: “In January 2014, in an attempt to curb obesity, Mexico introduced taxes on sugary drinks and energy-dense food. Everyone is watching to see what effects these taxes have, as policy-makers in rich and poor countries struggle to respond to the looming health epidemic caused by changing diets."

Wiggins said: “Research in the UK in 2009 predicted that imposing a VAT-style 17.5 per cent tax on less healthy food and using the proceeds to subsidise fruit and vegetables would save between 3,600 and 6,400 premature deaths a year from diet-related disease.

“Even the lower estimate (3,600) is more than twice as many as the amount of people that die on the roads in the UK and a huge effort is put into road safety."