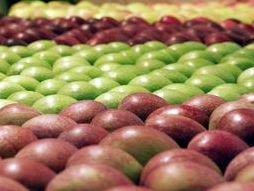 Managing director David Pratt told the Fresh Produce Journal: “In the northern hemisphere season, 35 per cent of our business is English apples and pears, predominantly from the Wisbech area. We grow our own fruit there as well as source from other growers in the area.

“In 2011 a lot of the crop was significantly destroyed by frost. That hit us pretty hard as well as contending with the same trading issues that the rest of the sector was facing.”

The company’s Growers Direct business based in Wakefield has been expanding. He said: “It is a growing part of our business and what we are trying to do is broaden the customer base we supply and naturally spread our risk so that we supply foodservice and wholesale customers as well as the major multiples. We are also growing our UK business and English apples and pears are now the core or our business.”

Other actions that EWT has taken include investment in more efficient computer systems and a large new grading operation near its head office in Spalding as it had outgrown its previous facility given the increase in trade of English apples. The company now handles 10 per cent of the UK’s entire apple business.

The EWT management team has also been revamped since the departure of Jack O’Brien as chief executive in March last year, with Pratt reappointed to the board in May 2012 as managing director following his return to the firm and Gregg Fawcett appointed finance director last month following the retirement of Paul Taylor.