Sainsbury's grows ahead of the market by 0.9 per cent for the three-month period ended 17 February 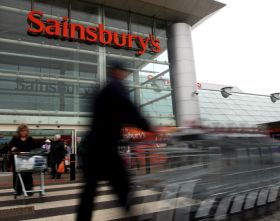 Despite the recent horse-meat scandal and its anticipated impact on sales, Sainsbury's has managed to buck the trend as the only UK retailer of the so-called 'big four' to increase its grocery share for the 12 weeks ending 17 February.

Growing ahead of the market by 0.9 per cent, the retailer's grocery share improved by 0.1 percentage points to 17.0 per cent for the period.

The latest grocery figures from Kantar Worldpanel also show that Morrisons is the only retailer of the 'big four' to post a decline in sales during the period.

The Bradford-based retailer suffered a 1.4 per cent drop in sales compared to the same period last year, while its retail share dropped 0.6 percentage points from 12.4 to 11.8 per cent. Meanwhile, Waitrose and Aldi continued recent momentum with both retailers achieving all-time record grocery market shares of 4.8 and 3.3 per cent respectively during the period.

However, market-leading supermarket Tesco has suffered a decline in its market share by 0.4 percentage points and Edward Garner, director at Kantar Worldpanel, believes a lack of promotions, rather than the horse-meat scandal, has been most detrimental to the retail giant.

He explained: “Tesco’s share has come under pressure this period, with a drop from 30.1 per cent a year ago to 29.7 per cent now.

"It might seem natural to attribute this decline to the horse-meat contamination; however, Tesco undertook heavy promotions this time last year, where consumers received a £5 voucher when they spent £40, and not repeating this offer will have adversely affected its share.”

And despite frozen burger sales down 43 per cent and frozen ready meals down 13 per cent in the wake of the scandal, the frozen category remains robust with Iceland recording a 10.1 per cent growth in sales during the period.